Growing up in Darjeeling and Kolkata, and being a regular visitor to the neighbouring state of Sikkim, as a child I invariably associated the Himalayas with gaily painted Buddhist monasteries or gompas, fluttering colourful flags that kept away evil spirits, and maroon robed monks. It was much later when I travelled to Uttarakhand and Himachal Pradesh that I realised these age-old mountains held many secrets amidst its high peaks. Some in the form of beautiful old temples carved in stone and wood.

My tryst with Himalayan temples started with a visit to Kedarnath, Badrinath, and Gangotri, during my school days. Despite the milling crowd, these places still 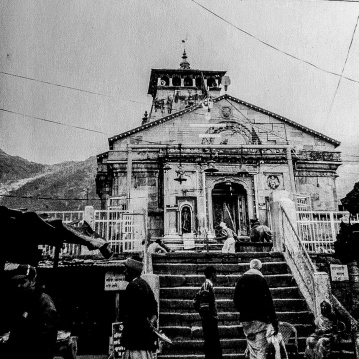 retain a charm of their own, and a darshan of the evening aarti at the Kedarnath temple is a magical experience. Makes you realise why “the land north of Ganga-dwar is known to the wise as Paradise Ground” (Kedarkhand Skanda Purana).

There is a belief among the mountain dwellers that in the Himalayas there are as many deities as there are hamlets. Nothing could be truer than this especially in Himachal Pradesh where every hamlet has its own local deota and possibly a kul deota of the head priest. They are worshipped in kathkuni styled pretty shrines built with wood and stone

. Besides the temples for the local deota that are often reconstructed or relatively new, there are also many early medieval (post classical era) stone temples with exquisite sculptural works on them. Most of these temples are functional, well maintained, and

often under the purview of the ASI. Yet, they remain unknown to most tourists that travel to Himachal Pradesh. While speaking to the locals I realised that this anonymity is a conscious decision for keeping the temples away from unwanted attention. The locals prefer to preserve them the way they have always been … standing in isolation.

Interestingly, besides the stone and wood temples, often trekkers come across small piles of stones at a particularly precarious bend or at a cross-point, with a flag or cloth tied onto them. These are holy shrines dedicated to the hillside spirits or deotas gathered up as an appeasement to avoid accidents. A custom that is as ancient as human civilisation and continues unabated through time.

The Kullu Manali circuit, a tourist hub famous for its scenic landscape, is also renowned for its temples and often referred to as the Valley of Gods. The ancient name of Kullu was Kulut or Kulantapitha, and finds mention in old Vedic literature. The term Kulut is historically important as it denotes a place that was beyond the then dominant socio-political norms or kula- vyavastha. Around 6th c. CE, after defeating the imperial Guptas, Khashas became the dominant ruling class in this area (as recorded on the Salanu inscription from the Tirthan valley), and they established a Gana-rajya, a form of theocracy (Malana remains an extant example).  Few centuries later the Rajputs dispelled the Khashas and brought in the feudal system, forcing the Khashas to migrate to distant places. Interestingly, the Khashas, later came back as Rajputs and are still considered powerful in the outer and inner Seraj region of the Kullu valley.

A somewhat definitive history of the Kullu valley can be derived  from the genealogical records of the Rajas of Kullu known as Vanshavali. From this record it is believed that Vihangamani Pal after being displaced from his seat in Haridwar (then known as Mayapuri; though there are some speculations that Vihangamani Pal came from Prayag) came to establish his kingdom at Jagat Sukh, with the blessings of the Hadimba devi. Thus, started the Pal dynasty that ruled Kullu until 1450 CE. From Jagat Sukh, Raja Visudh Pal shifted his capital to Naggar, and later the capital was again moved to Sultanpur (Kullu) in 1660 under Raja Jagat Singh.

The entire valley, covering Kullu to Manali that includes Mandi, is dotted with temples built predominantly in the Nagara style of temple architecture. The Nagara style, originated during the Gupta rule, shows the following basic characteristics: a cruciform base plan, a curvilinear/convex shikhara, a garbagriha and a mandap

In Himachal Pradesh, owing to easy availability of wood from forests, another common form seen is the timber bonded style with a pent roof and a veranda. The other styles seen are:

My article will focus on some of the temples in and around Naggar, which was once the capital of the Kullu kingdom.

This is a huge pagoda style three-storeyed wooden temple, similar to the Hadimba Devi temple in Manali. According to folklore, the temple was in the shape of a spider web woven by the Devi herself after turning into a spider. The original temple was built during the reign of Raja Yashodha Pal, while the current prettily carved wooden structure is largely a reconstructed one.

While inside the temple complex, I noticed many stone murtis , evidently older than the wooden structure that we see now. Some were kept free standing, while some were embedded into the newly constructed walls. Being a functional temple all  murtis are under worship, evident from the flowers and leaves in front and the red tilak on their foreheads. The murtis include Anantashayana Vishnu, Ganesha, Shiva-Parvati, and Mahisasurmardini. Sharhi yatra, an annual fair is held here in the month of May to honour the Goddess.

wooden carvings on the temple wall showing an amorous couple 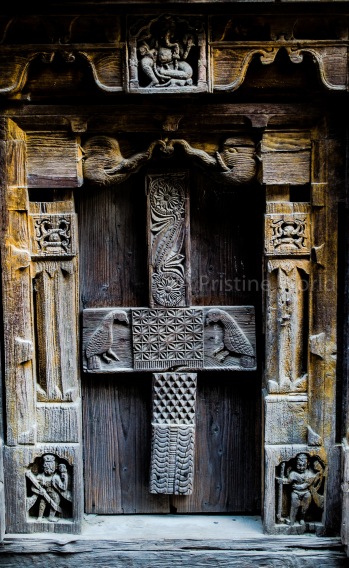 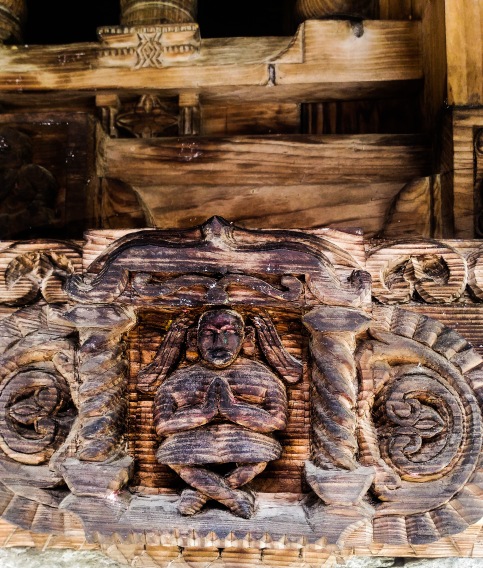 Peacocks, Dwarpalas, and Ganesha on a door panel (left) and a devotee or a donor on the temple wall

Stone murtis once part of the original temple (?) Lakshmi, Anantashayana Vishnu, and Ganesha (looks to be part of a broken panel, now cemented to the wall) kept together under a newly constructed shed 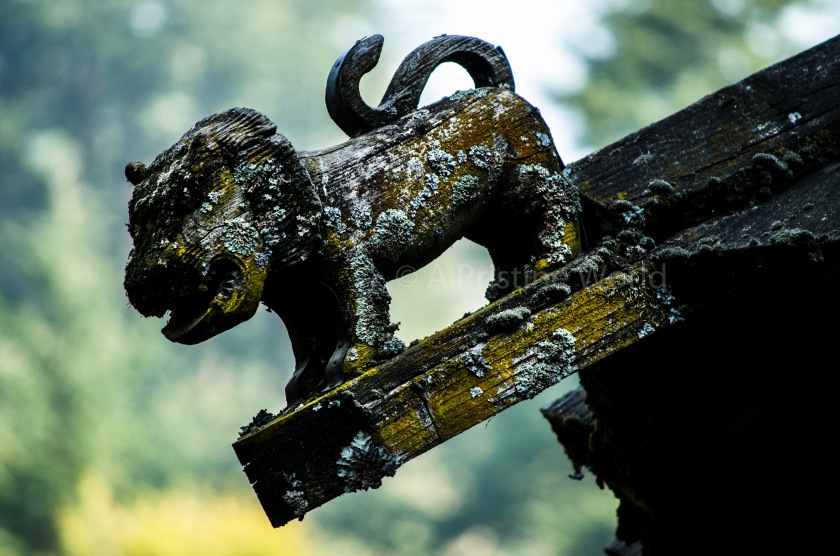 A rather mossy looking wooden simha pranala: there are four such pranalas placed at four corners of the pagoda styled shikhara

Footprints carved on stone, placed near the entry door to the temple 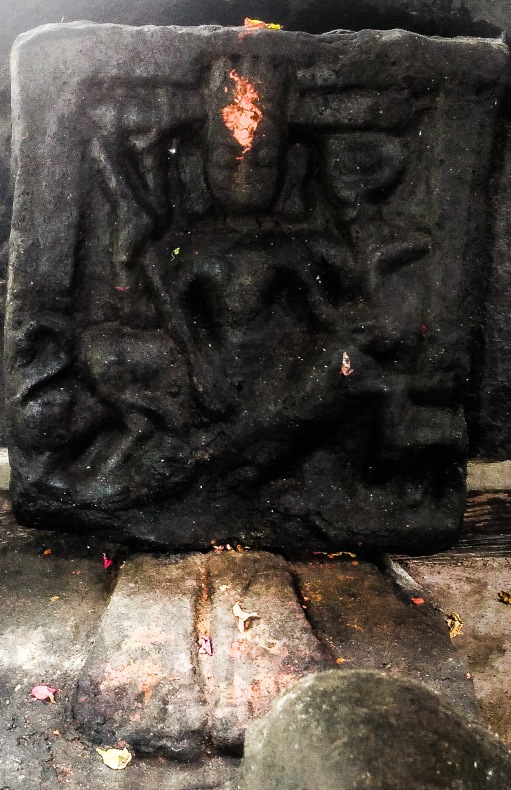 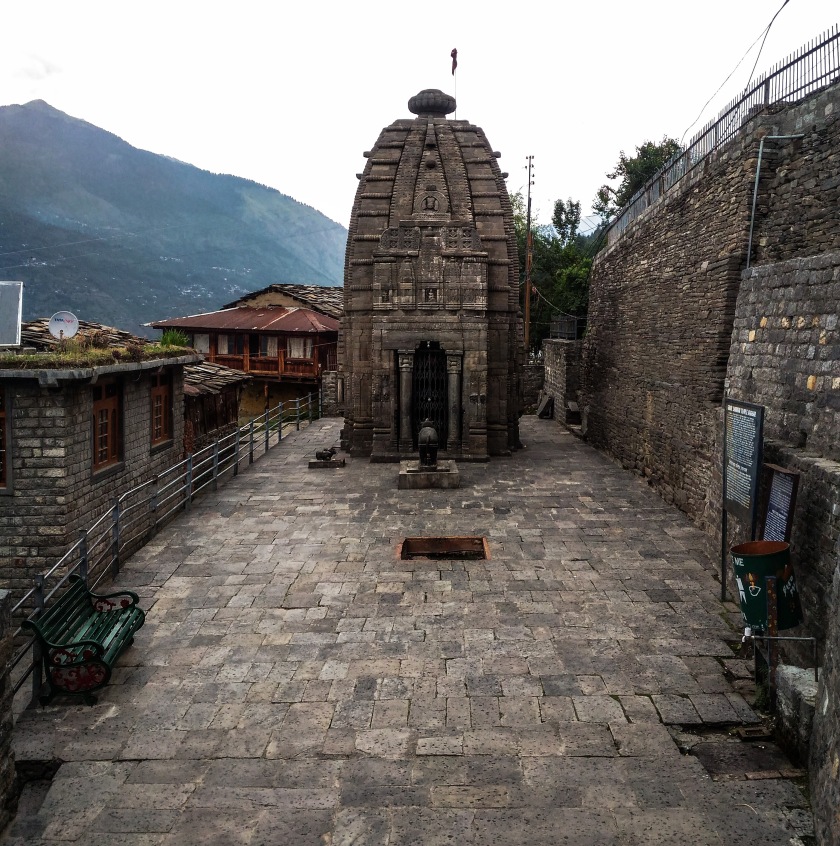 This beautiful 11th-12th c. CE temple stone stands right beside a village, yet holds a serene atmosphere. It was raining when I had reached the temple and there was not a soul in sight. As I stood in front of the centuries old stone structure, then wet and glistening in the rain, the feeling was ethereal and of supreme tranquillity.

The Gauri Shankara temple is a perfect example of Nagara style, following the Gurjara Pratihara tradition that was once popular in the Kullu valley. It is considered the last temple to follow this particular architectural pattern in this area. It is tri-ratha in plan, has a square garbhagriha, with a vedibandha (the socle) showing kumbha and ardharatna motifs that include the mouldings of kalasa and kapotali . The jangha (temple wall) show bhadra niches on the three cardinal directions east, north, and south. The walls have square and rectangular recesses that depict dancers, musicians, warriors, deities, birds, purnakumbhas, and purnaratnas. The shikhara is curvilinear, with an amalaka at top, is decorated with chaitya motifs (chandrasalas), and the corners have bhumi amalakas marking the storeys. The mandapa is pillared with square bases and ghatapallava as capitals, while the sanctum entrance holds a Ganesha on the lalatabimba. 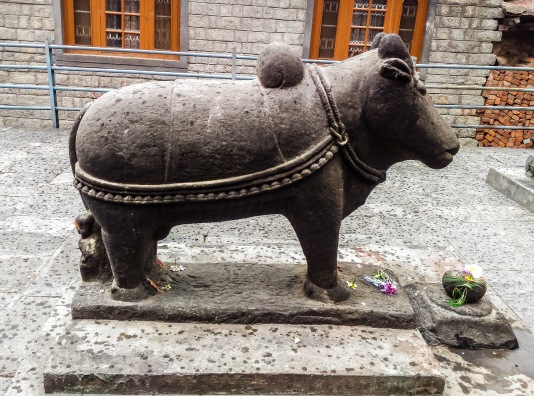 A beautiful stone nandi greets you as walk towards the temple doorway. Notice the little figure that is pulling its tail ( a closer look will reveal it’s  a little lady who dares to pull Nandi by his tail)

The river devis, Ganga and Yamuna holding kalashas, along with dwarapalas, on two sides of door leading to the garbhagriha They wash away your sins and impure thoughts before you enter the sanctum

A donor couple (or devotees) and a mithuna (an amorous) couple sculpted on the wall.

Trimukha Shiva from part of a broken panel is kept in one of the niches. The pillars here are of the fluted type. A panel commonly seen on the Shikhara of the Himalayan temples. After all, Himalayas are Shiva’s abode

Another broken panel of Shiva kept in a niche

This 11th c. CE temple sits amidst an enchanting setting, surrounded by thick forests and orchards. I came across it while walking aimlessly through the Dashal village lanes. The pretty roads take you around the farms, orchards, and you meet a gushing stream with a panichakki. After crossing the little wooden panichakki, you  take a turn and suddenly this temple is upon you. The rains had just stopped when I reached, and the clouds were slowly dispelling, when the sudden appearance of a temple from amidst the rising cloud cover made the entire setting seem almost unreal.

This pancharatha Shiva temple with a pillared mandapa is richly carved and figures of Vishnu, Brahma, and flying gandharvas are seen on the capitals. The door frame of the garbhagriha is richly carved with floral patterns and figures of dancers and musicians. Ganga and Yamuna with dwarapalas flank the doorway, while Ganesha sits on the lalatabimba. Above the lintel is a panel depicting the navagrahas. 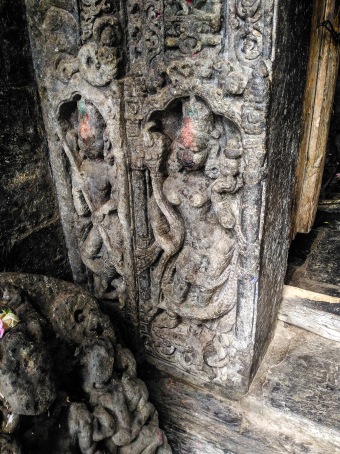 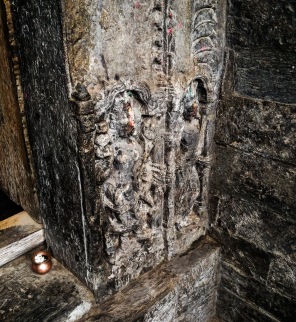 Other stone figures inside the garbhagriha include Mahisasurmardini, anantasayana Vishnu, Shiva.

Erotica carved on temple walls have a deep underlying philosophy. During Vedic times, Purusharaths (human life goals) were propounded and one among them was Kama or physical pleasure. Mithuna couple sculptures on the walls of temples panders to ancient Hindu philosophy wherein yoga (spiritual exercise) and bhoga (physical pleasure) are the two paths that lead to moksha (final liberation), explains Tarun Chopra in his book ‘Temples of India’. Deep in the throes of passion they represent the transition from the physical to the spiritual plane of consciousness analogous to the walk from the mandap to the garbhagriha. One enters the sanctum leaving behind all worldly thoughts including the erotic represented by mithuna sculptures on the walls of the temple

Naggar and its adjoining areas areas are dotted with temples of various styles and times of construction. Among these, some temples and a unique custom that caught my eye are:

Some sculptures that I  saw lying outside. These are all worshipped, and the temple is  a functional one with a deity inside the garbhagriha.

2. An old Chandi temple showing the the timber bonded style with a pent roof and a veranda. The small, solitary wooden structure in the second photograph, I was told, is a place where the neighbouring deities reside, when they come visiting.

3. A roadside “ancient” village temple dedicated to a devi. What interested me here were the offerings made to the goddess. The masks were eye catching too.

4. An interesting custom prevalent in the region is the worship of the local deotas that is distinct for every hamlet. While I missed the devta on his palanquin in this celebration in a village named Banjar, we met a couple of apdevtas roaming around in their broom stick gowns. We were duly blessed by them with dried floral twigs that was to be put behind our ears and kept for the day. A novelty to be blessed by the apdevta instead of devta!

As I keep taking the roads less travelled in order to explore the interiors of Himachal Pradesh, lately I find myself agreeing more and more with the locals when they tell me that these temples and certain remote high altitude places are better off when kept away from tourist radars. The feeling of awe, the overwhelming sense of magic and enchantment, the sensation of an unspoken power radiating from these old temples when I stand in front of them, would all disappear like thin mountain mist, if hordes of disinterested tourists carrying their plastic packets of chips and water bottles descended upon them. Some paths better be left less travelled, except for the ones who truly love and respect nature and heritage.

She can be contacted at monidipadey@rocketmail.com