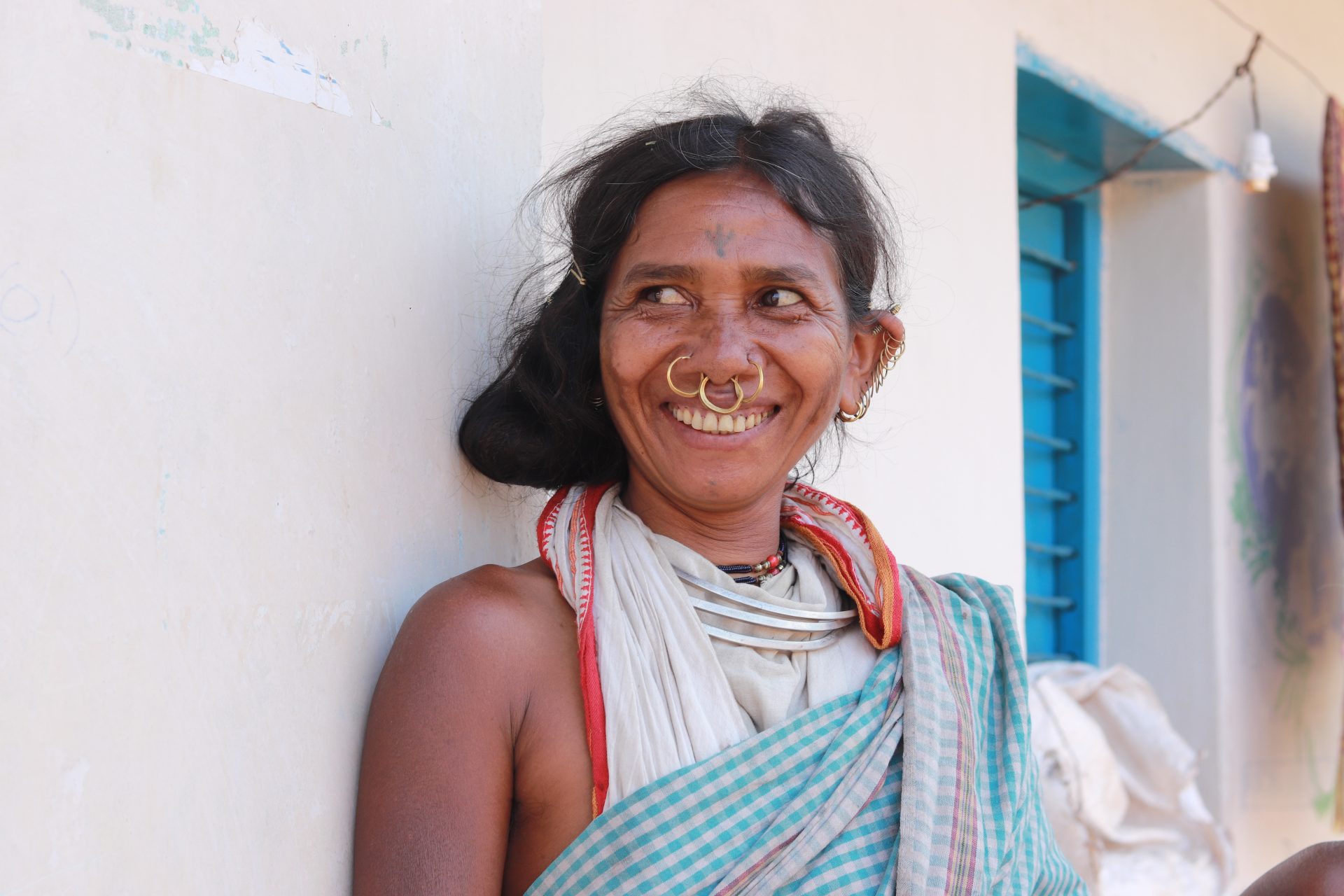 A popular story goes – In the remote history Virabhadra was the King of Kashi. One of his sons was Jagdas. After being denied a share in Kashi kingdom, Jagadas came to the shrine of Goddess Vindhyavasini and engaged in a long tapasya to seek her blessings. After failing to evoke response, he decided to surrender his head to the goddess. As soon as the first drop of blood fell on ground the goddess appeared before him. She declared that a brave hero and a future ruler would appear from the drop of the blood. This son, Bundela was named after the drop (bund). 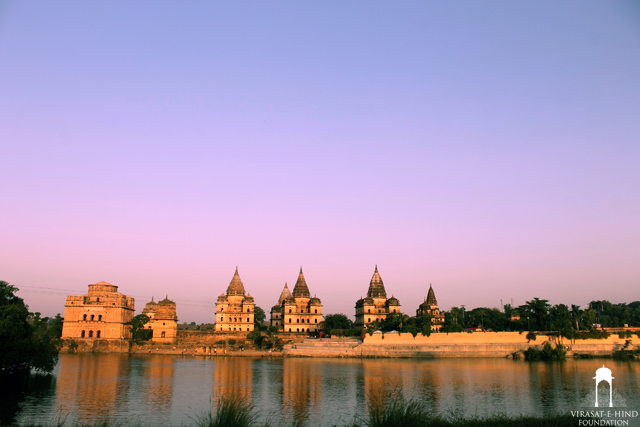 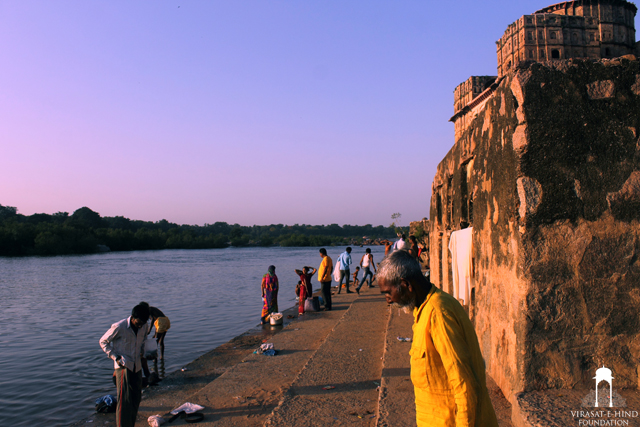 Orchha is located in a low hill plateau near an island formed by the pristine Betwa or Betrawati River.

Orchha gets its name from an interesting story. According to the story, Raja Rudra Pratap was out on a hunting expedition when he came across a small Rama Temple in the middle of the forest. Being a devout follower of the God, he sat in front of the temple to meditate. A wolf was hiding nearby. The smell of human sweat pulled him closer to the king. All of a sudden a booming voice came out of nowhere shouting ‘Orchha’, the chasing command given to dogs. The hunting dogs awakened and chased the wolf finally killing it. According to the story the command was given by the god himself. The king there on decided to establish his capital at this holy spot and named it Orchha.

Rudra Pratap though founded Orchha, but he did not survive to build his dream city. While saving a cow he died in the same year. His successor Madhukar Shah however took Orchha to a new height of prosperity. Orchha became a vassal kingdom under Mughal rule at the time of Emperor Akbar. 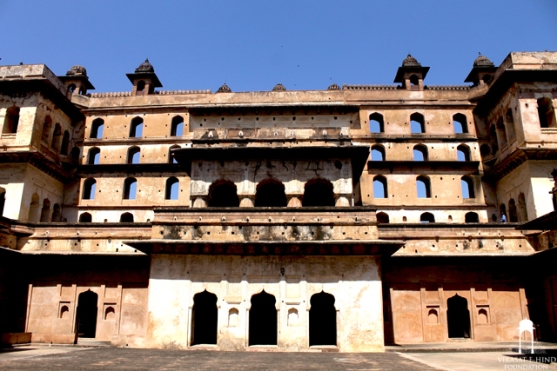 Vir Singh Deo was the next important ruler. He was a vassal of Jahangir, the next Mughal Emperor. It was during his rule, Orchha reached to a new height in terms of artistic and architectural proliferation. Vir Singh Deo had built Jahangir Mahal, a jewel of medieval palaces in India and the Laxmi Narayan Temple, where we see the best of Orchha murals. He was a man of dashing personality, but he also held a black spot as the murderer of Abul Fazal, the court historian and one of the nine jewels of Akbar’s court. 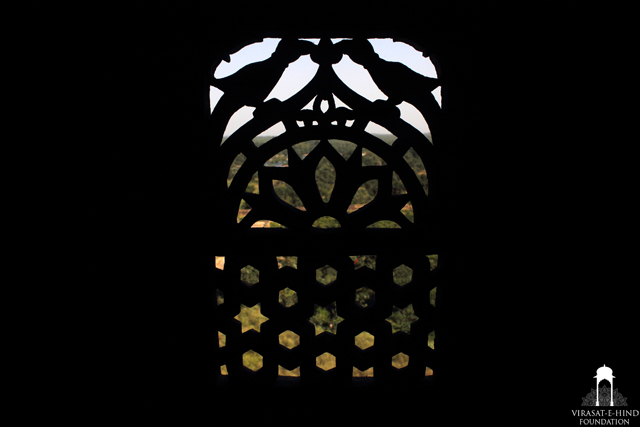 Jahangir Mahal had been built for a warm reception of Jahangir, the Mughal Emperor. A fusion of Rajput and Mughal architecture, Jahangir Mahal is a three storied building in square shape. The entrance is flanked by two impressive stone elephants that look as if they have been standing guards forever. Another remarkable feature of this mansion is the stone lattice work of the windows.

Orchha’s eternal spirit is the temple of Ram Raja, whose temple stands within the original palace, built during the reign of Madhukar Shah. In India, it is the only temple where Lord Rama is worshipped as a king.

According to a popular story, Queen Ganesh Kanwari, also called Kamla Devi was a devotee of Lord Rama. Once the queen visited Ayodhya with a desire to bring the child form of Lord Rama with her to Orchha. Before voyaging the journey to Ayodhya, the queen had ordered her servants to start building a temple (Chaturbhuja Temple) for Lord Rama.

At Ayodhya, the queen fasted and prayed for about a month, but Lord Rama did not appear. So, eventually in despair, she jumped into the river at midnight. A miracle happened. Lord Rama appeared as a child in the queen’s lap. The queen requested him to come to Orchha. Lord Rama agreed, but on three conditions. One of these were, he would be the king of Orchha and not her husband. The other condition was the first place where she would shelter the god would be his final place of resting. When they returned to Orchha, the temple was still under construction.  So the god was sheltered at the palace and that became his permanent residence. 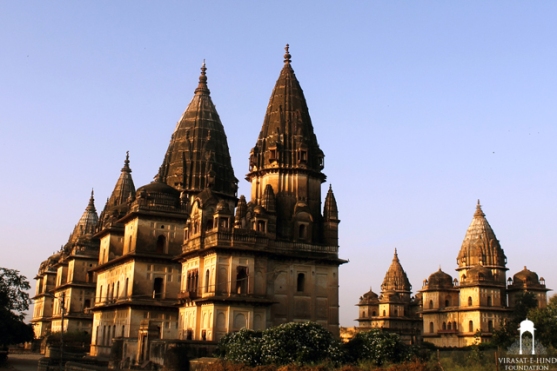 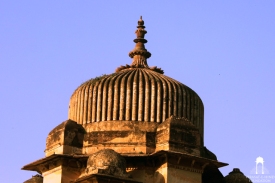 Orchha is placed in high esteem in the mural map of India.  The paintings of Orchha touched all aspects of life and Hindu mythology. Scenes from royal court and mythical beasts were also portrayed. In many cases, the Betwa was used as the backdrop for Krishna’s eternal romance with gopis and the rugged terrain of Orchha as stage for hunting expeditions and wars.  The best example of Bundela paintings can be found at Raja Mahal. Themes like Dasavatra, Krishna leela and Rag – Ragini dominate the walls of Raja Mahal. Paintings are also executed at Rai Parveena Mahal, where Rai Parveena, a high esteemed court woman is seen in various dance poses. 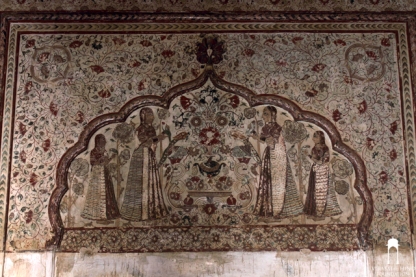 Laxmi Narayan Temple has the largest concentration of paintings, but these belonged to mid-19th century. Here we see a profusion of gods, palace scenes, everyday life, royal processions and the scenes of 1867 battle between Rani Laxmi Bai of Jhansi and the British force. 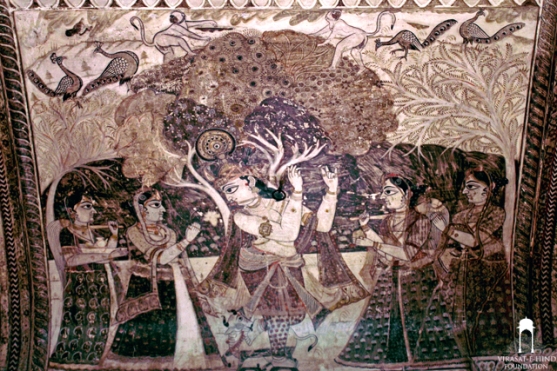 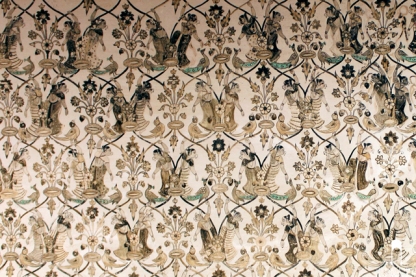 Today Orchha has lost its grandeur and has been altered into a quitter countryside.  But a visit to its ruins is still awe-inspiring transporting us to an era where cultures and ideas mingled to create extra-ordinary art and aesthetics.