‘A dervish is a friend of God

And a friend of a friend is a friend

So if you don’t know how to be a friend of God,

Try to be a friend of a dervish’

Chishtiyya is one of the four main streams of Sufi Islam worldwide. Though Chishtiyya had originated in Afghanistan in the 10th century AD, it was Khawaja Moinuddin Chisthi, a revered Sufi Saint who had his abode at Ajmer in Rajasthan in the 12th century AD, played the vital role establishing the Chishthi order in the Indian Subcontinent. The Chishthi order of Sufism which had made profound impact in the spread of Islam in India stressed on independence from rulers and states, rejection of money and land grants, generosity to others through sharing of food and wealth, and tolerance and respect to religious differences.

One of his eminent disciples was Hazrat Nizamuddin Auliya. According to primary historical sources, in 13th-14th centuries AD, Auliya’s influence on Muslims of Delhi was so much that a paradigm shift was effected in their outlook towards worldly matters. People began to be inclined towards mysticism and prayers and remained aloof from the world.

At the time of Auliya, the Chishthi silsila had attained an all-India status mainly because of moving out of a large number of his followers to different cities and provinces. According to Abdullah Shatteri, a noted historian of that time, Shaikh Nizamuddin Auliya had sent seven hundred well-trained disciples to various important cities of the country. These Khalifas had become central figures in their respective regions.

One among these khalifas was Hazrat Wajihuddin, who had migrated to Chanderi. In the reign of Allauddin Khilji, he was ordered by Hazrat Nizamuddin to go and settle at Chanderi and work for people here.

Chanderi lies at the meeting point of Malwa Plateau and Bundelkhand and was strategically located on major trade routes of Central India and also on the routes to Malwa, Mewar, coast of Gujarat and Deccan. Chanderi had attracted all major powers from Pratihars to Khilji, Lodhhi, Mughals, Bundelas and finally British due to its strategic location and abundance of natural resources, such as forest and water.

Hazrat Wajihuddin reached Chanderi in 1305 AD and established his khanaqah. Soon he attracted thousands of visitors to Chanderi. These devotees not only came from Chanderi and surrounding areas but places as far as from Bengal. 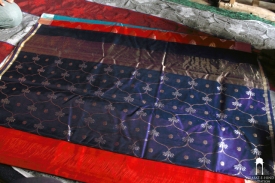 Meer Khurd in his book Siyar-Ul-Auliya mentions many devotees especially from Lakhanuti, which is near Dhaka, not only visited Hazrat Wajihuddin but decided to settle down in Chanderi. It was most probably this group of people that began practice of weaving in Chanderi as Dhaka was a major centre of weaving in those times.

Chanderi today is well-known for its unique weaving craft. Its patrons range people from all religions, classes and faiths inhabiting world over, but most of us are unaware of its deep connection with Sufism, especially the Chisthiyya order of Sufism. 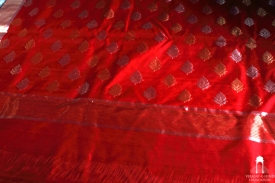 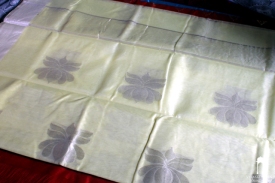 Mazar Khandan – e – Nizamuddin is the grave complex built in 1425 AD for the followers of Hazrat Nizamuddin Auliya during the rule of Hosang Shah, the Malwa Sultan. The complex has some of India’s most beautiful jail work on its walls and carving of motifs on black stone graves. According to KK Muhammad, a noted archaeologist and an expert on the subject, the jail work of these tombs are earliest, which eventually would develop into more intricate refined jail work at mausoleum of Muhammad Ghaus in Gwalior and then dargah of Salim Chishthi at Fatehpur Sikri. Many of these jail works and motifs are also found in designs of Chanderi Saris and fabrics. Another attraction of these tombs is ogee arches. 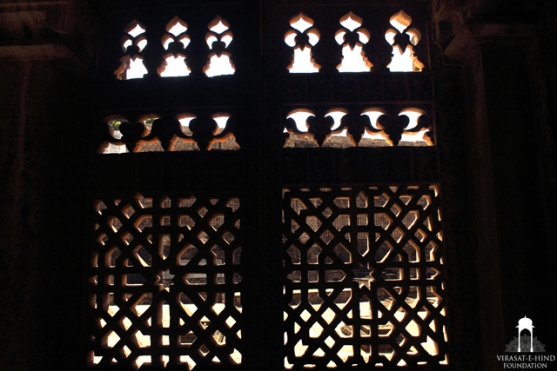 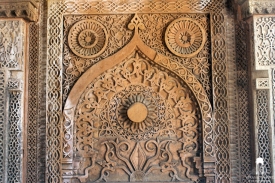 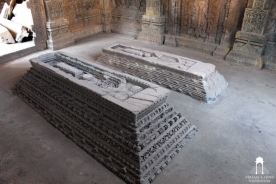 Come! Lets discover how the weaving craft of Chanderi meets Sufi Islam and appreciate the subtle merge of two faiths – Hinduism and Islam defining the very idea of India.